Hello, my name is Tim, and I’m a recovering wall starer.

No doubt you have heard the story of Plato’s Cave. The ancient allegory that depicts imprisoned men chained with their backs to a fire, unable to see anything but the shadows of reality that dance on the walls of the cave.

You may recall that these captive minds lauded their peers who could name the shadowed distortions. In the darkness where all saw the same flame-licked forms on the wall, those who could not elevated those who deduced similarities in the patterns. But, the advancement of one over another through the explanation of a false reality just proves that even a King of Fools must, by definition, be a fool himself.

[pullquote_left]This is how you will feel when you turn from the wall that is pre-internet business intelligence architecture and toward the fire that is Digital Analytics . . . Past the fire, through a tunnel leading out, you may even glimpse the bright blue sky that is the truth and reality of your data.[/pullquote_left]

As the story goes, it is not until a prisoner is released and turns toward the fire and away from the wall that all preconditions and presuppositions first begin to float away. Even then, the freed prisoner must make a decision to either move forward, past the fire, out of the cave and into the searing sunlight, or to return to the comfort of the wall and rejoin the merry band of fools who “know” their reality because they have named it so. To turn from the wall and step past the fire is the most difficult, and important, decision a freed prisoner can make.

Can you imagine the fear of a freed prisoner who has made the decision to turn away from the wall and toward the fire? All that he has known is challenged. All that he has named is unrecognizable. What may have been thought to be a crawling man is now revealed to be a dog. A column thought to be supporting the cave is shown in truth to be a small twig placed upright in the ground close to the fire, thus casting a disproportionately high shadow across the wall.

This is how you will feel when you turn from the wall that is pre-internet business intelligence architecture and toward the fire that is Digital Analytics. What you thought you knew will be challenged. What was perceived to be insurmountable, may be revealed to be insignificant. Past the fire, through a tunnel leading out, you may even glimpse the bright blue sky that is the truth and reality of your data.

And then, you will look back at the wall and the shadows. Your fear will subside. You will be tempted to sit back down and remain a prisoner by choice, rather than shackles. You will take comfort in knowing the names of the shadows and recognizing their shifting forms. You will consider giving in to the lowest common denominator because it provides comfort and security to be among many, and the pioneering alternative is lonely and unknown.

Instead of rejoining the fools, look back toward the fire. As your eyes adjust you will see men and women, not shadows. These are real people who have broken their own gaze of the wall and have journeyed away from its fallacies. Some of the people you will see are those who have been outdoors and returned to the cave to laugh at the fools who still stare. You will see wanderers who cannot map their way out of the cave and are too proud to ask for directions. Perhaps you will chance to glance upon the most pitiful bunch of them all, those who have completely laid down and swivel their heads back and forth from the wall to the fire, torn between what they knew and what they now know, paralyzed by inaction and timidity. 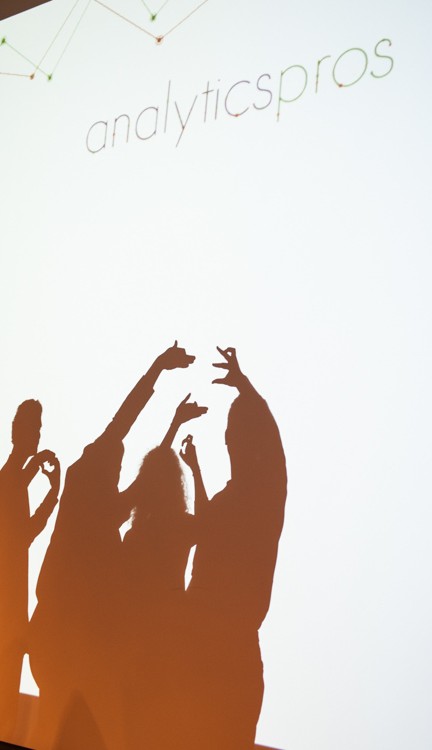 But as you gaze away from the wall and see the scores of scoffers, wanderers and worriers, you will also see the guides. You will recognize them first by the fact that they do not stand with the scoffers, for they haven’t the heart that mocks. You will see them standing shoulder to shoulder with the wanderers and directing them to the opening of the cave. You will know the guides by their tender patience in nursing the anxious. You will see them wiping the worried brow of the paralyzed and reassuring them that the wall is not what it seemed and that the light of truth in data is infinitely more reassuring once the wall is left behind.

If you are reading this post, you are already looking away from the wall. In all likelihood you are either too frightened to move or are scoffing, wandering or worrying. I’ve done all three myself and I’m sure I’ll do all three again. I’m fortunate to have found a guide in the team at Analytics Pros and am proud to have been named their Director of Client Services.

I can’t get into the details of what I have witnessed over the past three months working with my guide. Not just because of NDA’s and proprietary notions but because these guys are smart! Seriously smart. From a business perspective, I’ve seen them solve real human problems with data and digital analytics. I’ve seen them map out strategies for large corporations and startups alike. Strategies that increase revenue and conversions. I’ve seen 21st century results and solutions to problems that many businesses haven’t yet recognized as a roadblocks. And, every day brings new ideas, new innovation and new possibilities.

If you need someone to hold your hand as you walk away from the wall, nurse your analytics back to health, map a way to implement a solution and stop your wandering or turn your team from intransigent scoffers to digital analytic action heroes, I’d like to work with with you in solving your problems and making your data dreams come true.

After all, us recovering wall starers have to stick together.