Google acquired Urchin Analytics in 2005 and later that year released a new version where they moved from a server-side/log collection model to the client-side/JavaScript model under the new Google Analytics name. Since then, we have had countless new features, redesigns, and capabilities added on, but the core of the platform has always stayed the same. You may be surprised to know that you can still use the original urchin.js analytics tracking code from 2005 and everything still works. That means the core of the Google Analytics platform even today still works with code that is over 14 years old.

Also important is that for the past few years, Google has actually had multiple analytics platforms. They have Google Analytics, which is primarily focused on website analytics as well as Google Analytics for Firebase (AKA Firebase Analytics), which is primarily focused on mobile app analytics. Having multiple platforms has made it challenging for companies that have both mobile apps and websites to have holistic measurement across platforms. Both Firebase and Google Analytics also have unique features that only exist in one or the other, but not both. It can be hard enough to manage one analytics platform, managing two completely different ones adds a lot of complication.

This update is what Google Analytics has named App + Web, which is a brand new type of analytics property. This is the first time the core Google Analytics platform itself has completely changed.  In short, this is a complete rewrite of Google Analytics. Everything about App + Web is new, it has a brand new data model and the interface, reports, and capabilities have been rebuilt from the ground up. Google is providing us a platform that is built for the future and the needs of future marketers.

App + Web brings over the real-time reports from Google Analytics for Firebase. This gives us way more flexibility than the current real-time reports. We can now easily filter by user properties (think custom dimensions), launch user snapshots, and get more granular insights into what is happening right now. 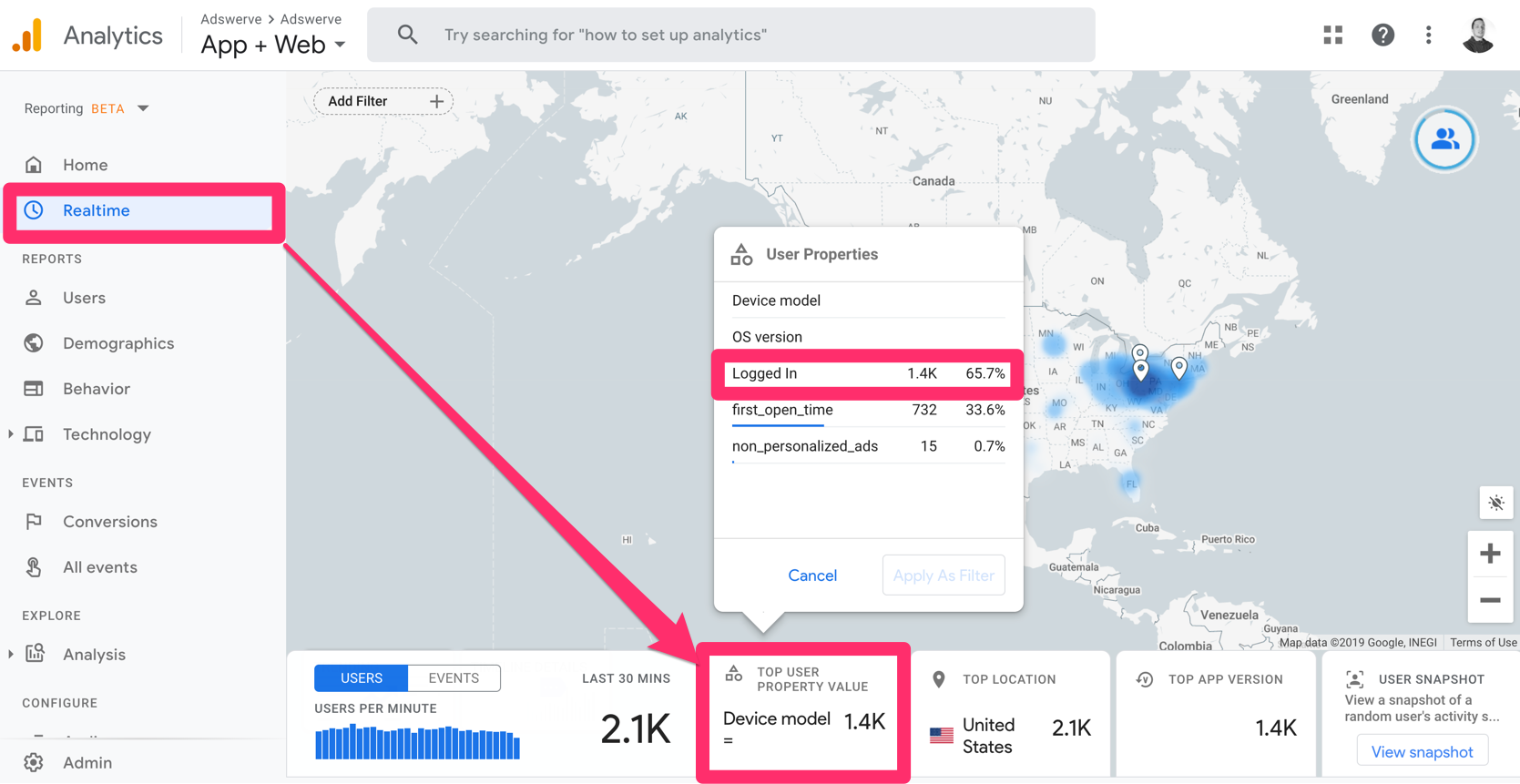 App + Web has new user snapshot reports, that allow you to see random anonymized users in order to understand what is happening on your site and apps in real-time with the new stream views. You can drill-into any interaction to see additional details, such as what user properties and parameters are associated with that interaction. 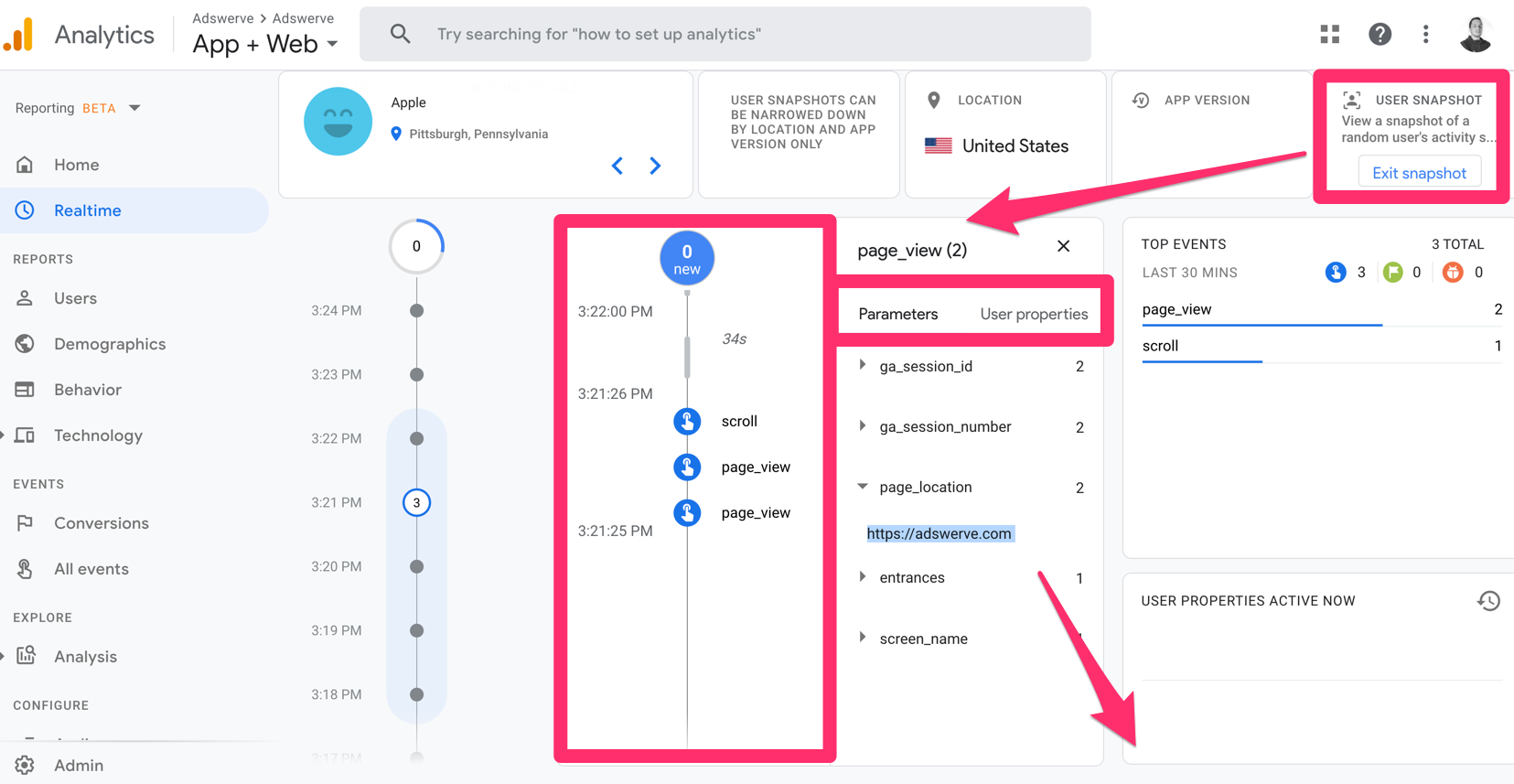 Since 2005, one of the biggest challenges with Google Analytics is getting users to track more than just pageviews. App + Web wants to help solve this by introducing Enhanced Measurement. By default when you create and install the new property, without any customization it will track outbound link clicks, downloads, video interactions, scrolls, and more. Think of this as a mini version of Google Tag Manager. You can disable this and customize everything as much as you want.

If you have ever need to test new updates to your analytics or troubleshoot implementation issues, you are going to love this new feature. We have a new Debug mode that automatically launches when you are in the preview-mode of Google Tag Manager. This will stream all your data into a stream view, so you can easily see all the data that is being recorded from your test visits, as well as all of the parameters and properties for each interaction.

Previously, Google Analytics was really rigid in how it let you handle the identification of users. You were forced to either rely on the default client ID (first-party cookie) or use the User ID (an identifier you supply). This resulted in separate views, where you had to choose to only look at anonymous users or only look exclusively at logged-in/authenticated users. App + Web changes this by introducing Default Reporting Identity. By default, it will use the anonymous first-party cookie ID, as it always has, but with the addition of also using the User ID with it. Meaning, the User ID will be the primary key any time it is sent, but the first-party client ID is also used whenever it is not available. At any time, you can change your preferred selection for identity setting and it changes all of the data in your reports to reflect your new choice. This setting will not permanently change any of your data collection or data processing no matter how many times you change it! 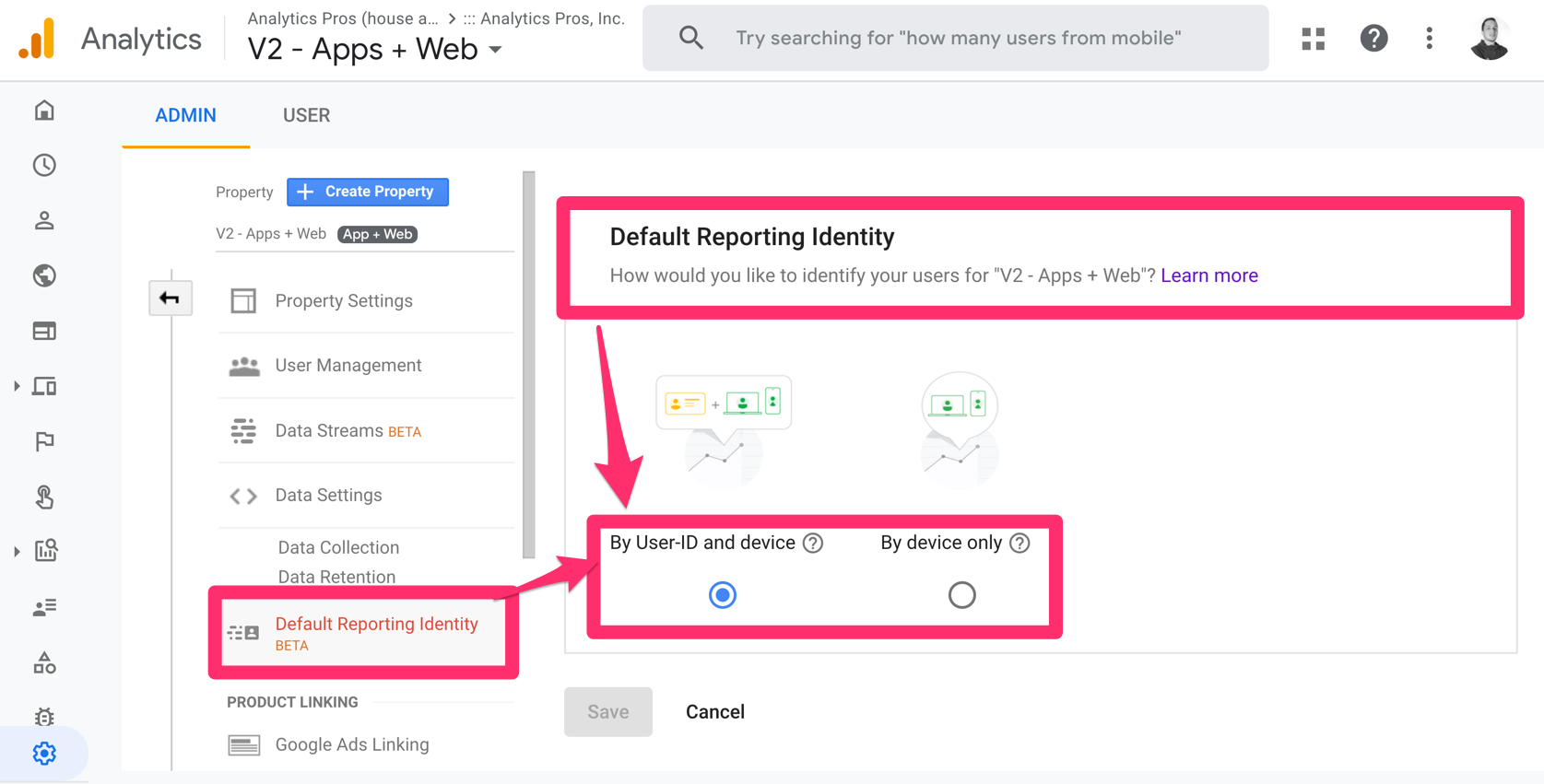 All of the reports in App + Web have changed. The familiar ABC’s(audience, acquisition, behavior, conversion) of Google Analytics are gone and have been replaced with a much simpler layout. I expect this to change significantly in the coming months, as there are actually a lot of reports needed for simple use cases such as attribution, user engagement, and audience insights that are completely missing. We have an exciting start though with new realtime widgets and a much cleaner look to the standard reports we do have. 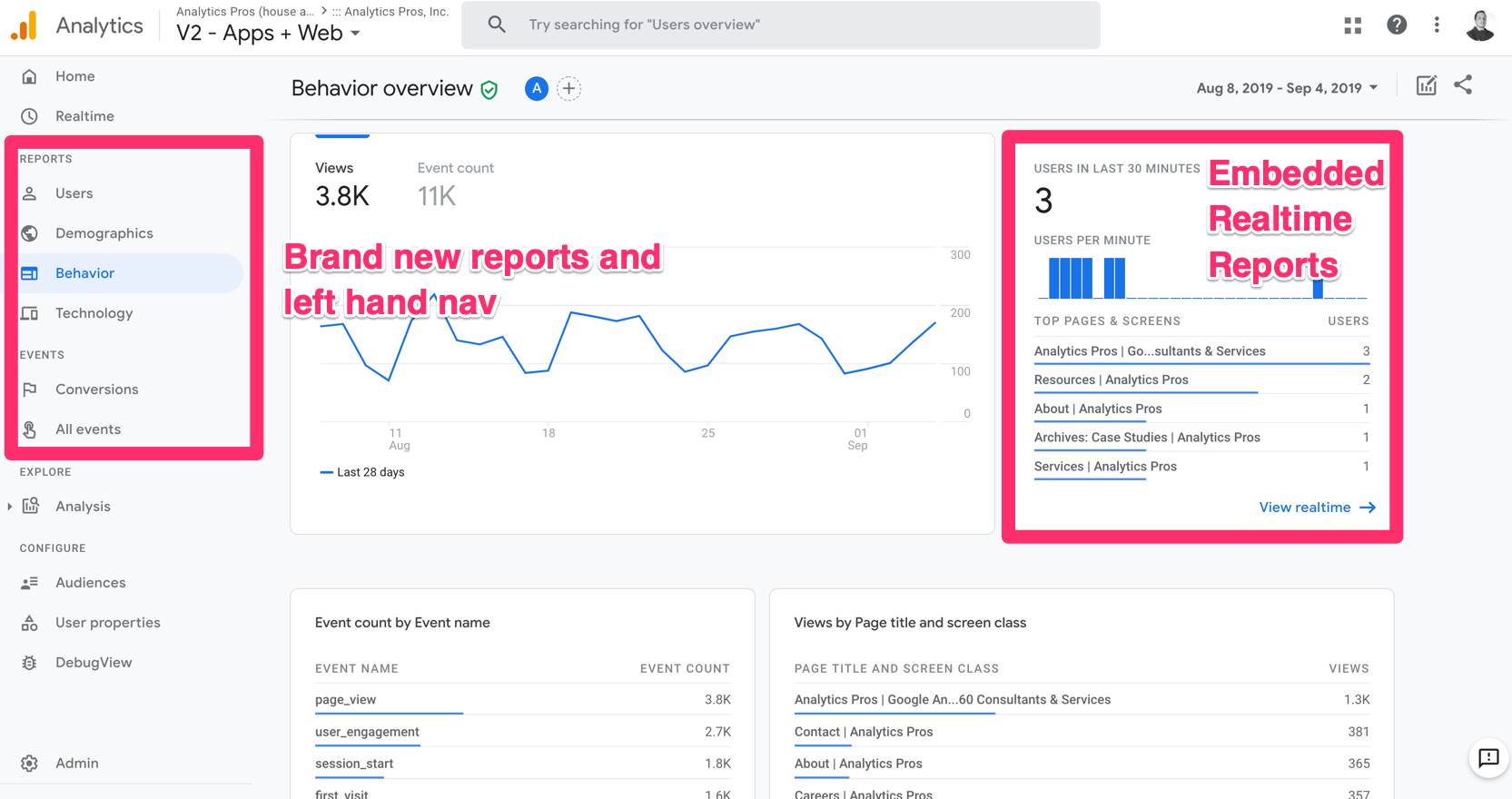 The new Audience Builder brings much-desired improvements in App + Web! We have a new event scope that never existed before. We can add time thresholds between actions. We can set membership durations in the primary builder. We have new options for temporarily or permanently excluding users from the audience when conditions are met.  The new Audiences work differently than Advanced Segments did in Google Analytics because when you save an audience by default you are saving it for all users and actually adding it to the audience’s reports. They are not as ad-hoc and user access specific as they were in the past.

One other big change is that previously in Google Analytics when you wanted to share audiences with Google Ads you had to do it by sharing each individual audience one at a time. In the new App + Web, when you link Google Ads, all of your audiences are automatically made available in Google Ads, which is way more useful! 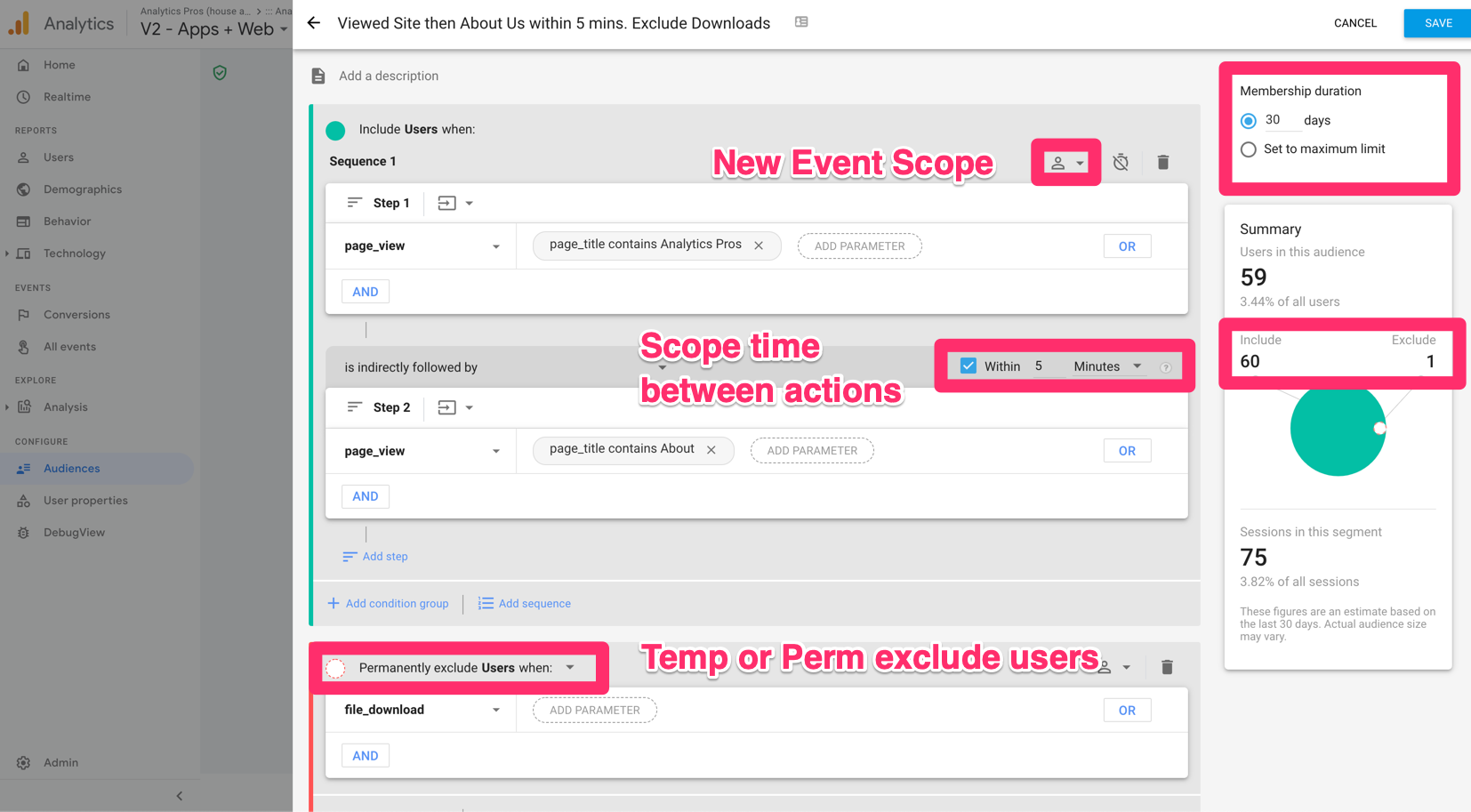 We have brand new cross-platform reports in App + Web. If you are sending a custom User ID and have the default reporting identity set to utilize it, you will see device/platform overlap data for users that are visiting from multiple places. 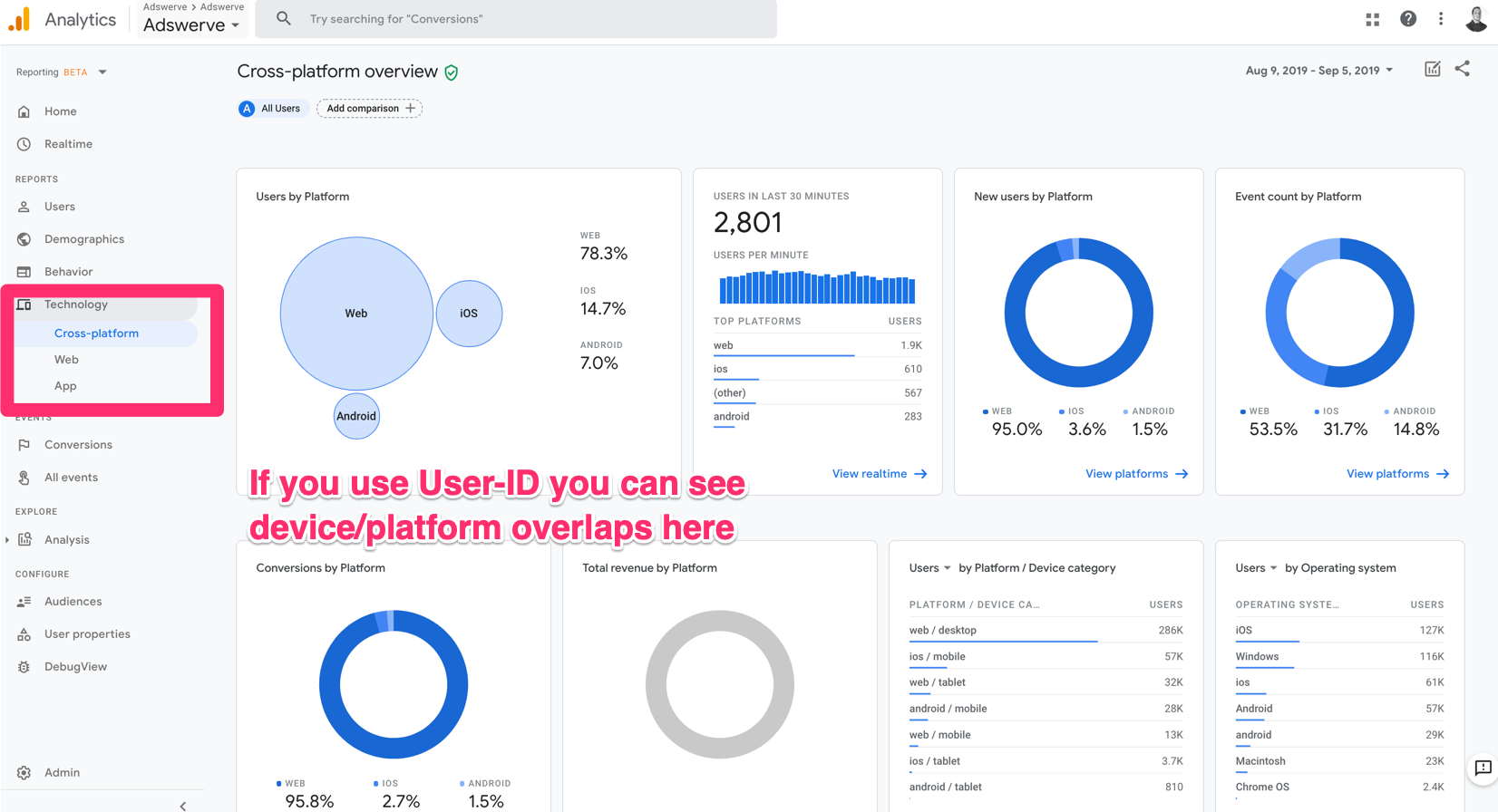 One of my favorite updates in App + Web is the new conversion tracking. One of the biggest issues with the existing version of Google Analytics is that most users never set up any goals and because of that miss out on being able to really utilize the platform correctly. App + Web seeks to solve this by introducing automatic conversions, as well as a simpler setup of custom conversions.

Ecommerce purchases, first visits, first opens, and in-app purchases are enabled as conversions by default. In addition, you can enable up to 30 more events as custom conversions, which you can toggle on and off as much as you like. Setting up custom conversions is improved in App + Web with the addition of a simple toggle to mark an event as a conversion, instead of the more complicated goal setup in existing Google Analytics. 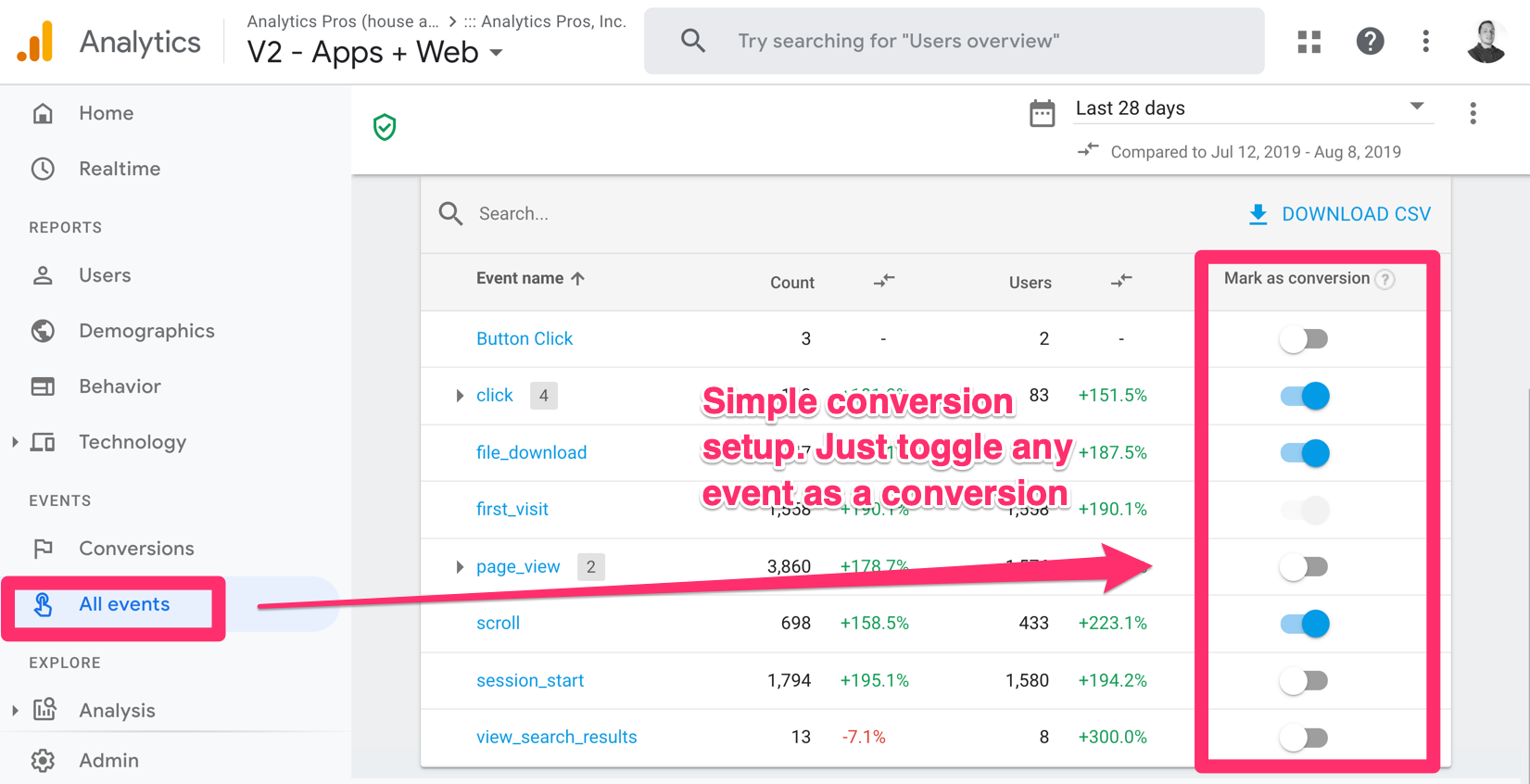 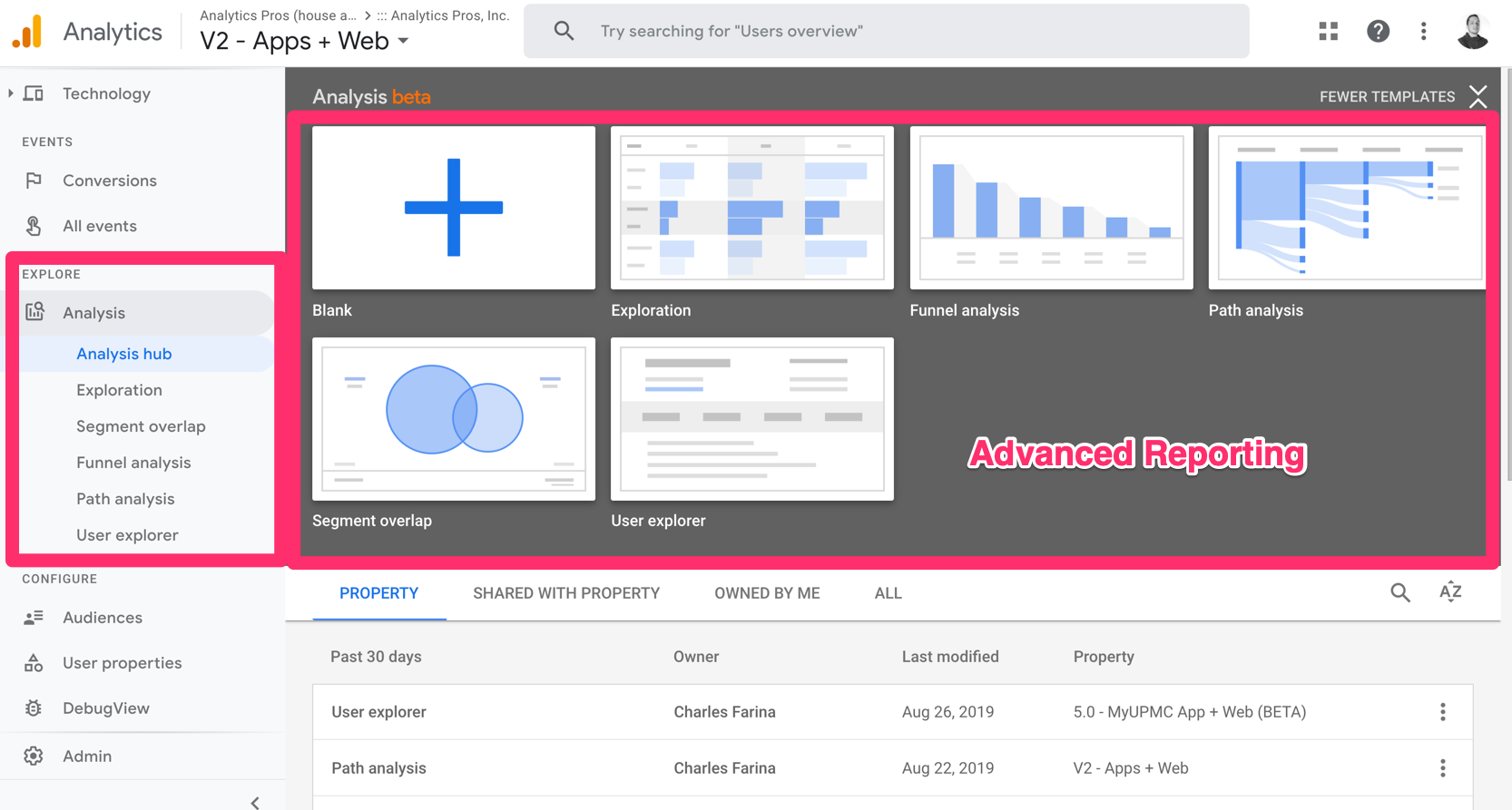 To this day one of the hardest things to do in Google Analytics Standard is to create a meaningful funnel report. Previously, only Google Analytics 360 customers had options for usable custom funnels and now App + Web gives everyone this ability. Here is what the funnel analysis report looks like. 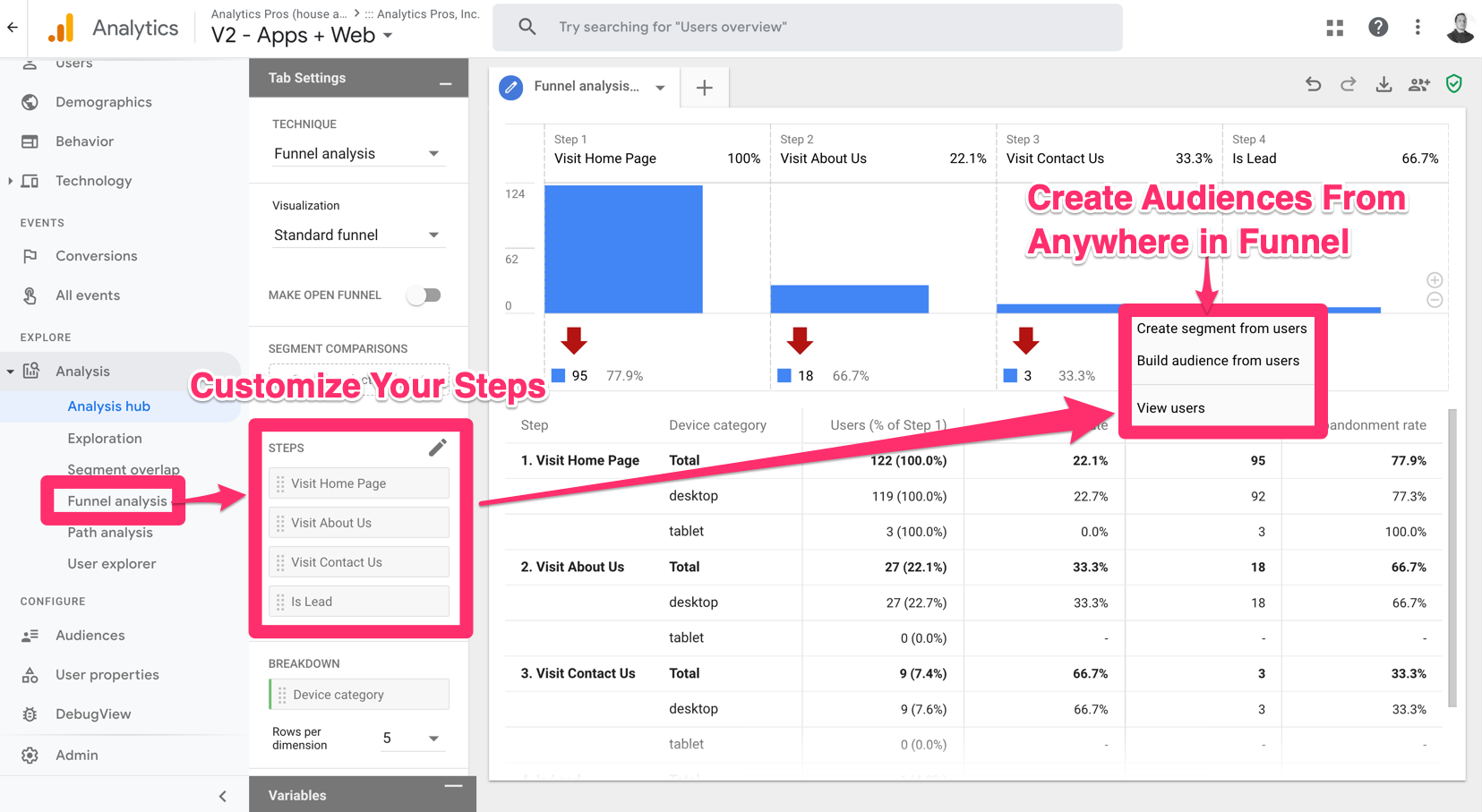 Here is a brand new feature for trended funnels. This allows you to easily see how each step within your funnel is changing over time. 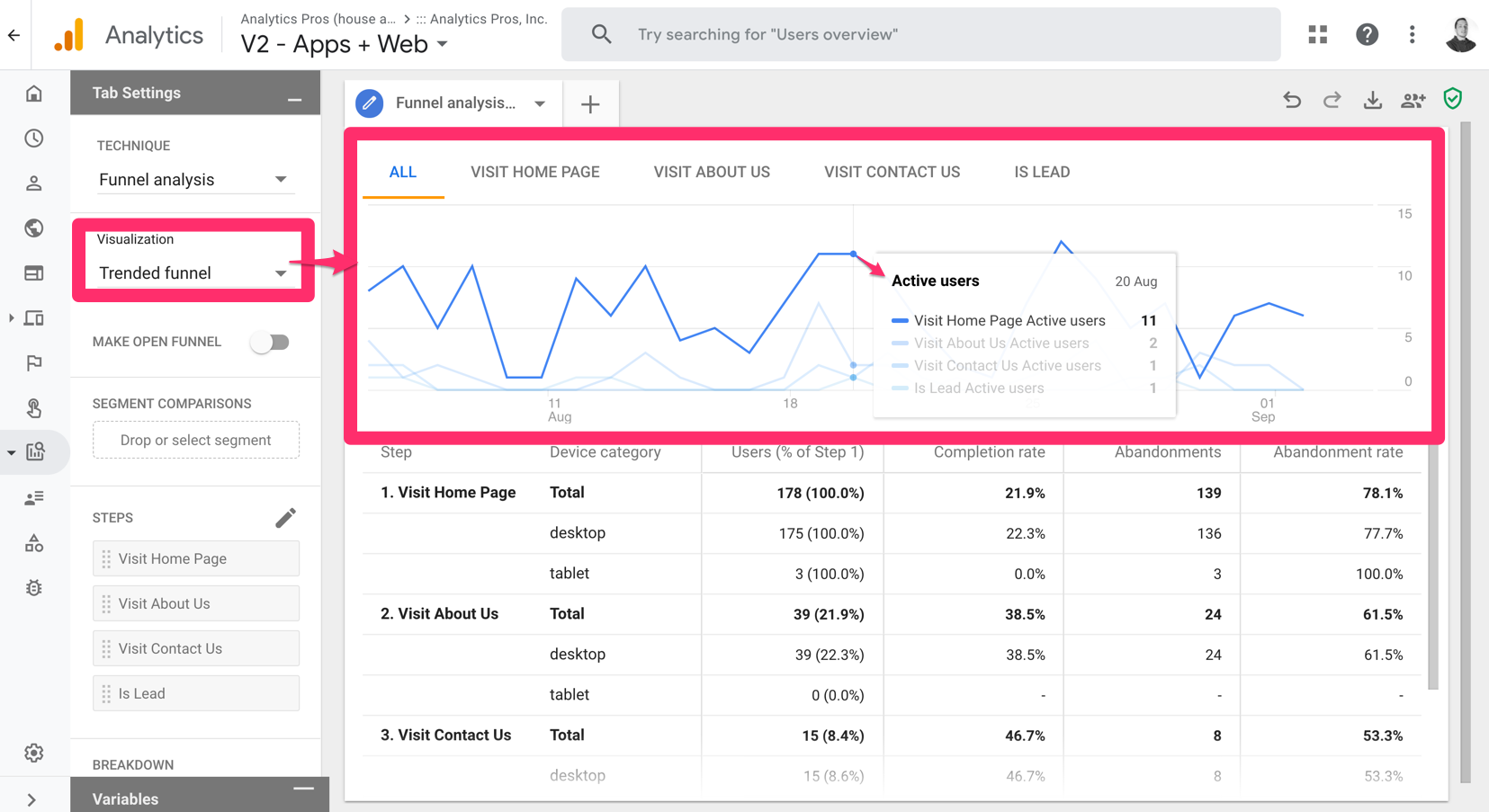 You can now choose to have an open or closed funnel. A closed funnel requires users to start from the first step and sequentially go through each step. An open funnel allows users to enter from any step within your funnel. 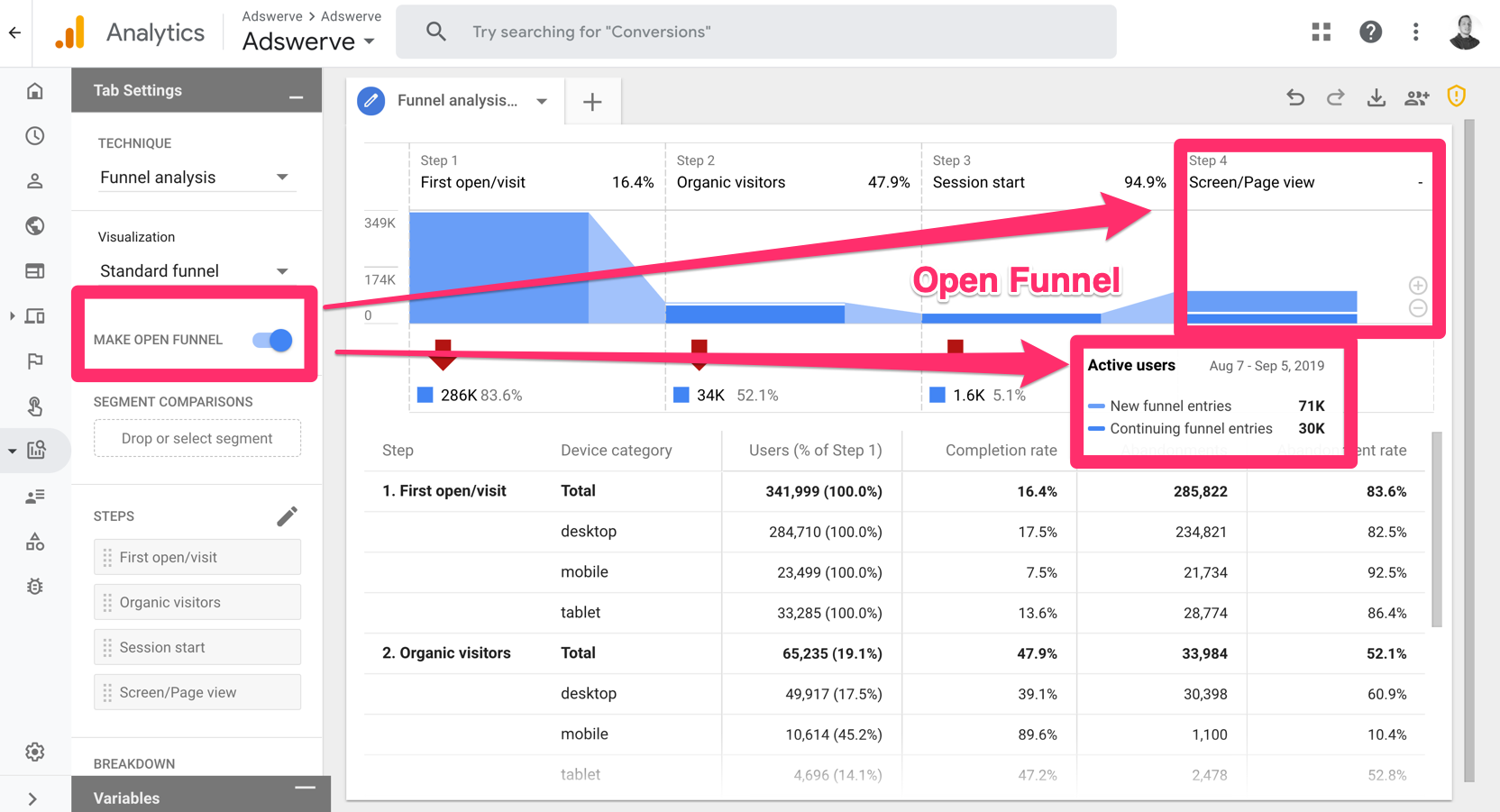 For the first time, we have a new elapsed time metric available for our funnels. You can easily see how long it takes your users to complete each step in your funnel. 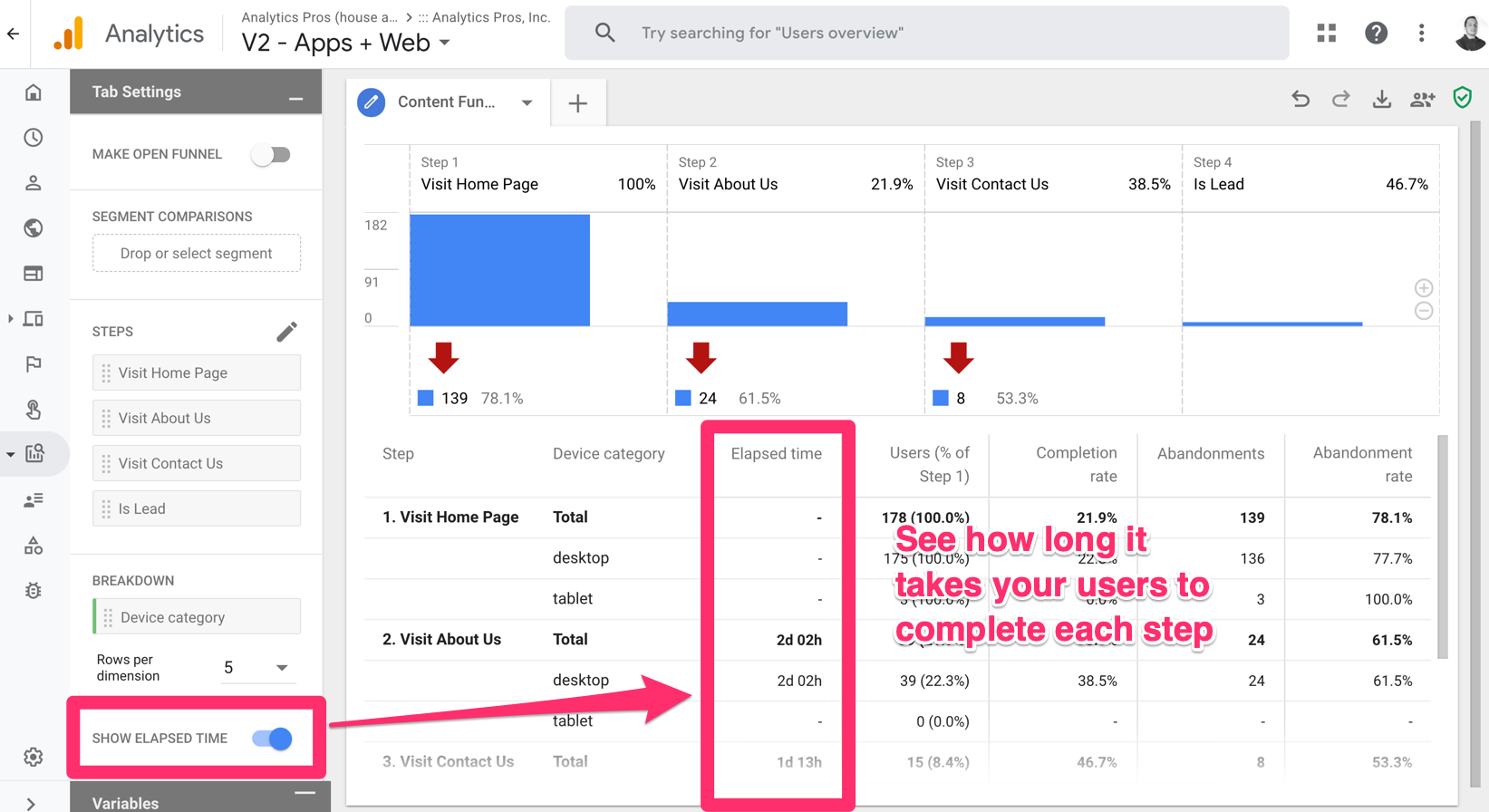 New Next Action in Funnels

Next action is a new feature for Funnels, which allows you to hover over any step in your funnel to see what the top next actions your users have taken immediately after completing the previous step. 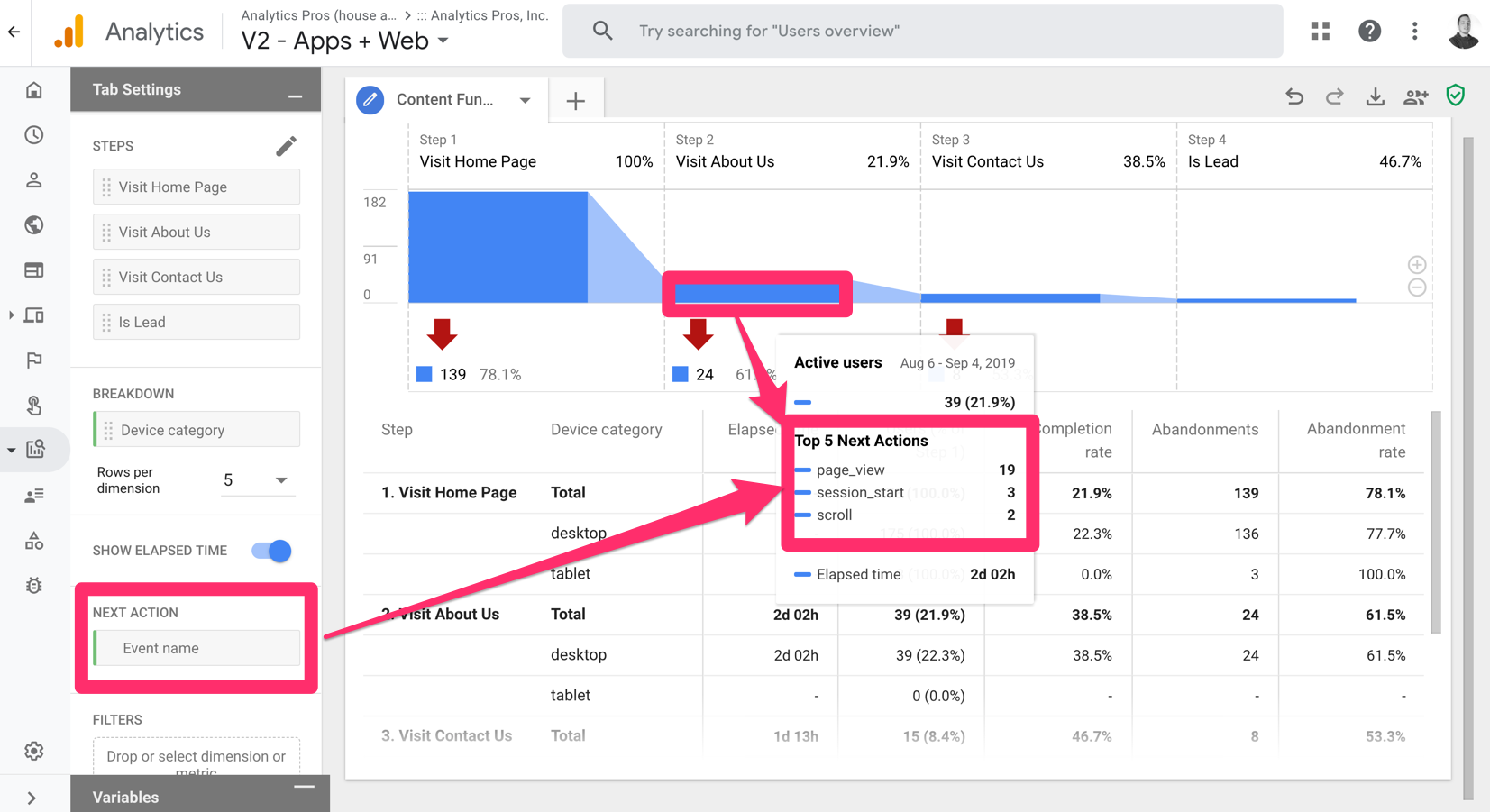 Pathing reports in Google Analytics have long needed a complete rebuild. We finally have a brand new pathing report in App + Web, which makes it easy to interact with various flows. I hope this report gets a ton of new features to help examine paths further with features to allow for exploration by starting from conversions, starting from certain events/pages, and including more exclusion options.

Another new feature in Analysis that is brand new is the new Anomaly Detection. This feature helps identify outliers in your date and is only available right now in the line charts visualizations underneath exploration techniques. You can set how days prior to your current date range you want to use to train the model. You can also choose your sensitivity setting. You can read more about the statistics and settings used in the help center. 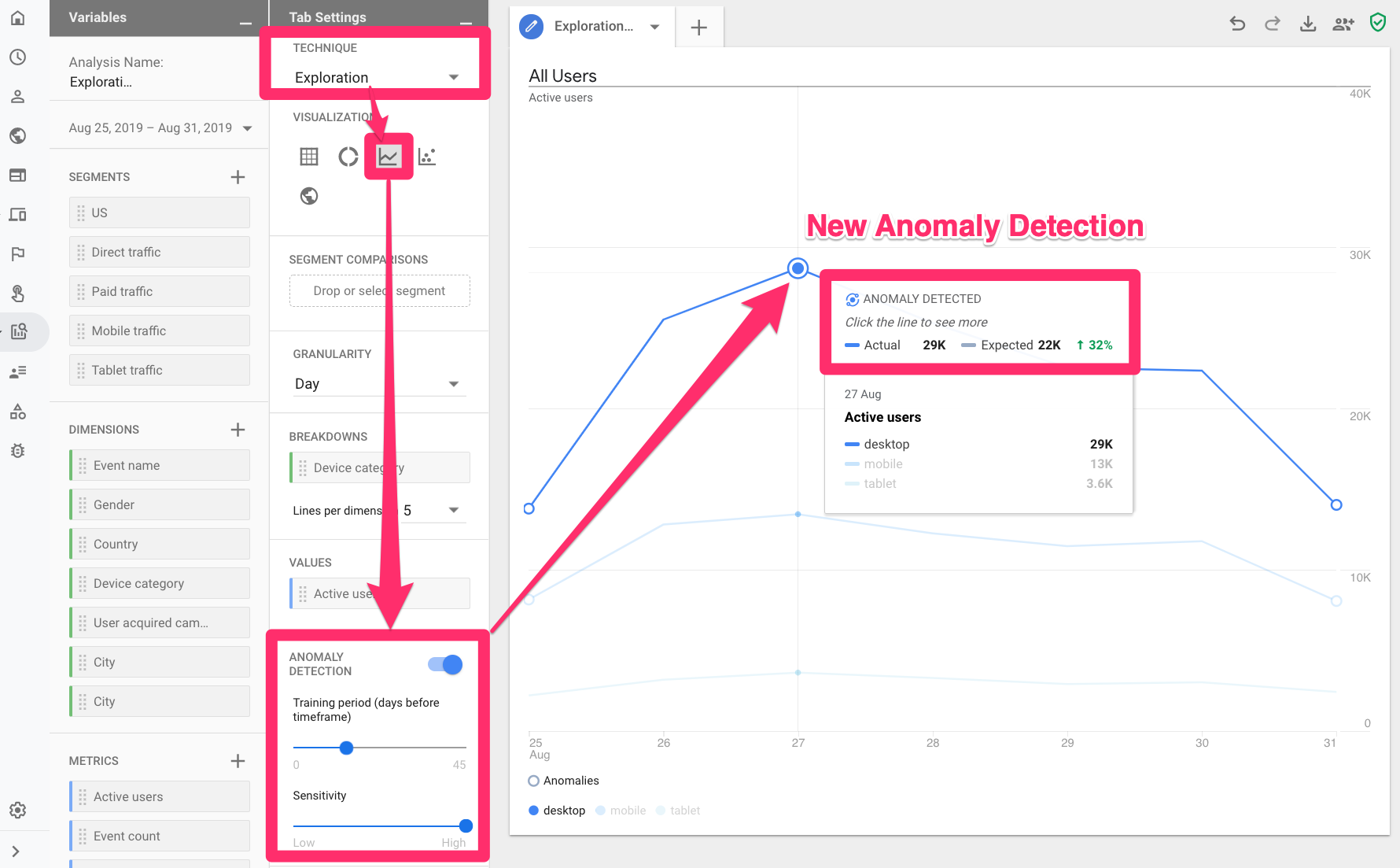 Biggest Feature of Them All – Free BigQuery Exports!!!

I saved the best for last. One of the biggest features requests and needs of Google Analytics Standard users was the ability to access their raw data to perform advanced analysis, reporting, and data integrations. This used to be a feature exclusive to Google Analytics 360, but is now available in App + Web for everyone! The integration itself is available at no cost but requires a BigQuery project and a credit card/payment method to cover any potential storage/query costs. You can head on over to our friend Simo’s blog to learn how to enable this. 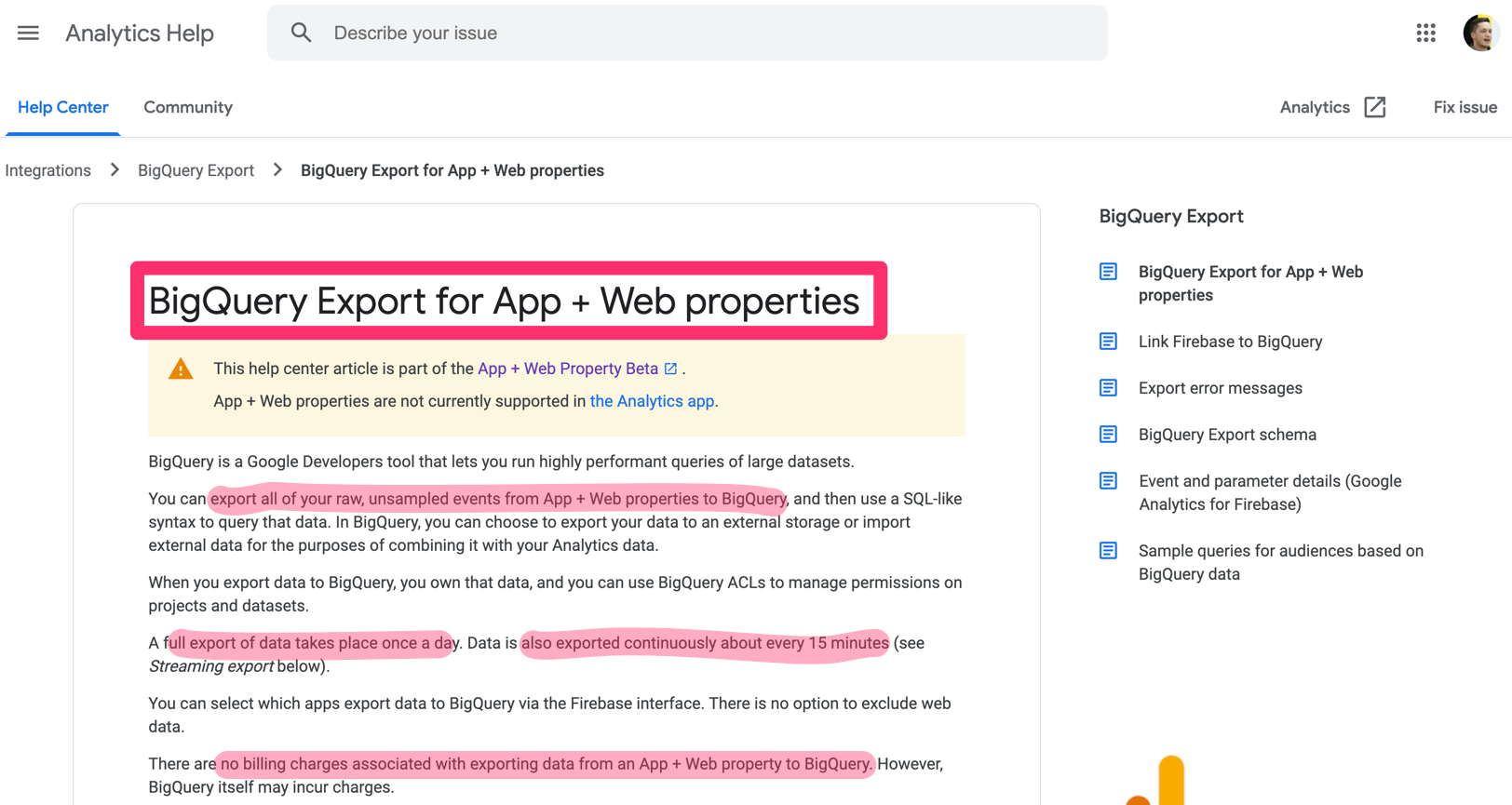 Getting Started With App + Web

This post is a great summary of all of the new exciting features I’ve found in App + Web. I am excited to see all of the other new features Google has in store for this. It is really important to note that even though there are many new awesome features, App + Web is still far from having use case parity with the existing version of Google Analytics. It also requires starting from scratch and does not import or use any of your data from other Google Analytics datasets. For these reasons, it is only recommended to use App + Web for web properties as a secondary implementation that exists with your current implementation of the existing version of Google Analytics. It is not yet ready to stand-alone as a primary analytics solution for websites yet!

If you are interested in getting started with App + Web and getting in from the beginning be sure to check out Simo’s implementation guide for Google Tag Manager, as well as Krista’s great posts. We will have many new posts on App + Web. Let us know in the comments if you have any questions.